The National Minimum Wage (NMW) is the minimum wage per hour a worker is entitled to in the United Kingdom. These rates are reviewed yearly by the government and are advised by the independent body Low Pay Commission (LPC).

In March 2015 the government announced that on 1 October 2015 the hourly adult rate of National Minimum Wage would rise by 20p, from £6.50 to £6.70 (3%). This is the biggest real-terms increase since 2007 and is estimated to benefit more than 1.4 million of Britain’s lowest-paid workers.

When looking at minimum wage per month, The United Kingdom is currently at the highest amount in 15 years. After a drop between 2007 and 2009, it has gradually been rising. Although this is a positive development, it is still one of the lowest minimum wages in Western Europe.* 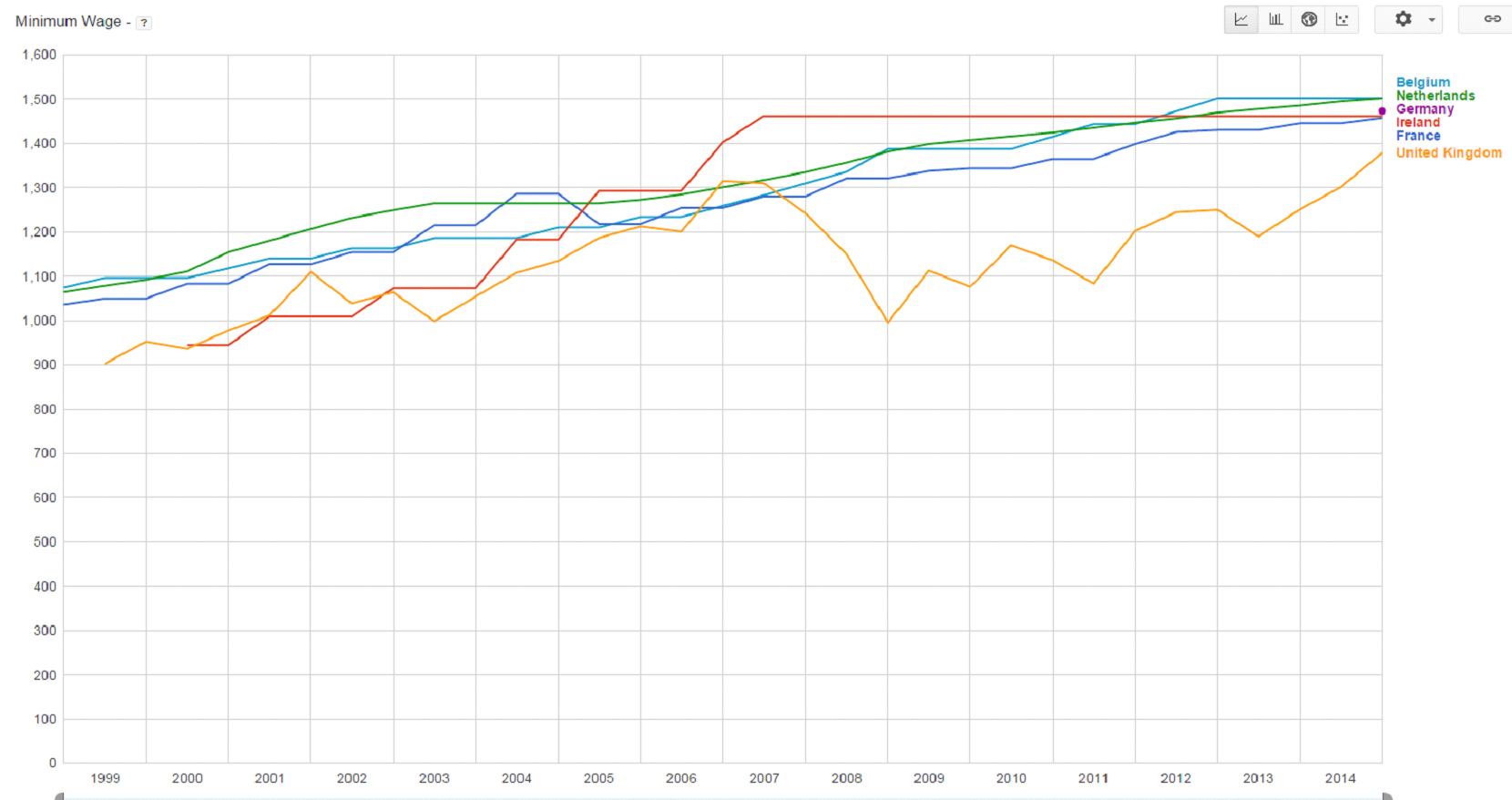 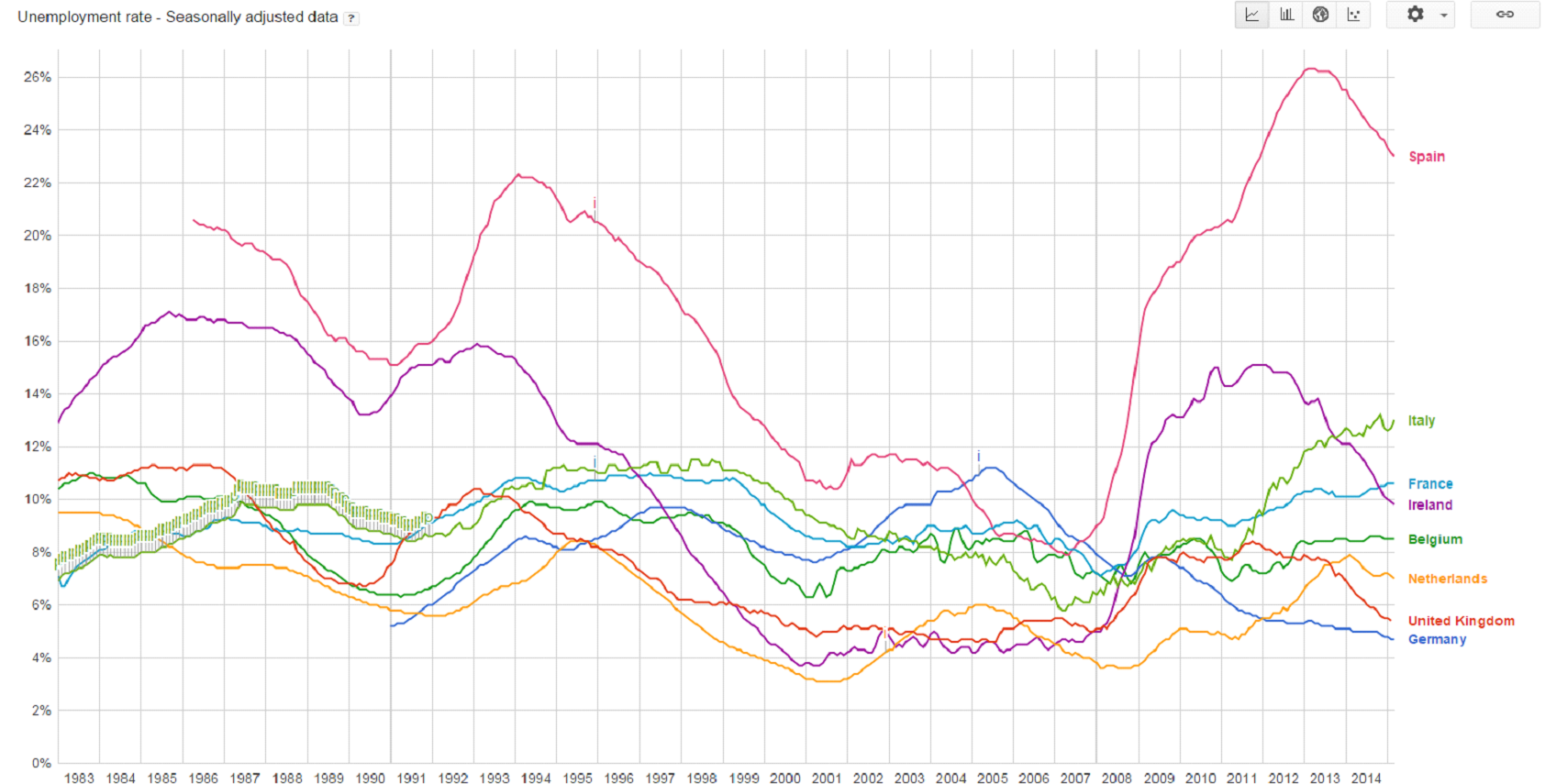 * National minimum wages before tax deduction and converted into Euro.

The announcement has been subject to discussion. While many argue that the increase is not enough, others argue that setting higher minimum wages would lead to fewer job opportunities.

While most people would agree the 3% increase might not seem a lot at first sight, there are other factors that need to be taken into account – such as inflation, prices of essential goods and housing.

Inflation has decreased to 0% in March 2015 and the Bank of England expects inflation to remain around 0% for the most of this year. This means that unless it would suddenly increase over the next few months, the 3% increment would actually mean 3% in real terms upon the introduction of the new rates in October.

In addition the price of essential goods have also been falling sharply. Food and non-alcoholic drinks dropped at an annual rate of 2.5% since 1997. Transport dropped at an annual rate of 2.8%. Clothes and shoes dropped 3.7% month-on-month. Even gas and electricity prices decreased a little. The decrease in prices means that one will have more money to spend after buying the essentials. Thus the standard of living is improved (in the short term at least).

Prime Minister David Cameron has also pledged to take everyone earning less than £12,500 out of Income Tax altogether and pass a law to have a Tax-Free Minimum Wage. This would also give a minimum wage worker more to spend.

The one major area where inflation remains high is housing – which affects everyone but especially the poorest. To put this into perspective; a person earning minimum wage would only just be able to afford a one bedroom flat in London. Providing they don’t eat, user power, pay council tax or wear clothes.

However the housing issue is something the Conservative Party has also pledged to do something about in their manifesto – they intend to build 200,000 new starter homes 20% below the market price for first-time buyers under 40. They also wish to extend right to buy, a policy for tenants of housing associations (private, not-for profit bodies that provide low-cost housing) to enable them to buy their home at a discounted prices. So the government does have plans in place to increase the supply of affordable housing.

With over 1.4 million people employed at minimum wage and with one of the lowest unemployment rates in Europe, one could argue that there is a good balance between offering a fair minimum wage whilst simultaneously not decreasing work opportunities. And while the new wages do not necessarily immediately tackle the housing problem in the short term, it will improve the standard of living for most.